Question 1.
Theorem: If an angle has its vertex on the circle, its one side touches the circle and the other intersects the circle in one more point, then the measure of the angle is half the measure of its intercepted arc. (Textbook pg.no. 75 and 76)

Given: ∠ABC is any angle, whose vertex B lies on the circle with centre M.
Line BC is tangent at B and line BA is secant intersecting the circle at point A.
Arc ADB is intercepted by ∠ABC.
To prove: ∠ABC = 12 m(arc ADB)
Proof:
Case I: Centre M lies on arm BA of ∠ABC.
∠MBC = 90° [Trangnet theorem] 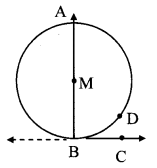 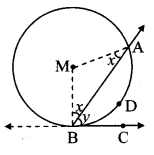 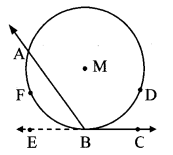 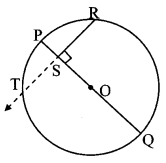 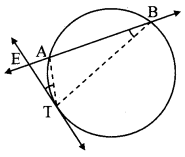 ∴ ∆PRQ is a right angled triangle. [Angle inscribed in a semicircle]

Question 7.
Have you previously proved the property proved in the above example? (Textbook pg. no. 81)
Answer:
Yes. It is the theorem of geometric mean.
∆PSR ~ ∆RSQ [Similarity of right angled triangles]